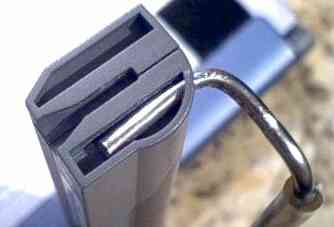 While I have loved my Sony C1X ever since I purchased it around 98, the fact that it did not have a built in "tilt stand" to prop the keyboard into a more comfortable typing position has bothered me since the day I purchased it.  My "quick fix" of a piece of rigid foam attached to the rear of the bottom ended up as my ratty solution until I needed to fashion a better mount for the dashboard of our cars for GPS use last week.


A close look at the battery exposed two voids between the "Y" shaped slot that serves as the mount to the PictureBook, so I carefully drilled a hole from the inside out the same diameter as a length of stainless steel welding rod on each end of the lower battery case cavity.

I then slid two short lengths of pvc tubing onto the rod and bent it into a trapazoidal stand shape.  The trapazoidal shape made it easy to adjust the spacing between the ends so that it would mate easily with the holes in the battery case.


The holes are slightly larger than the rod diameter which makes it easy to remove the stand and reverse it for transporting. 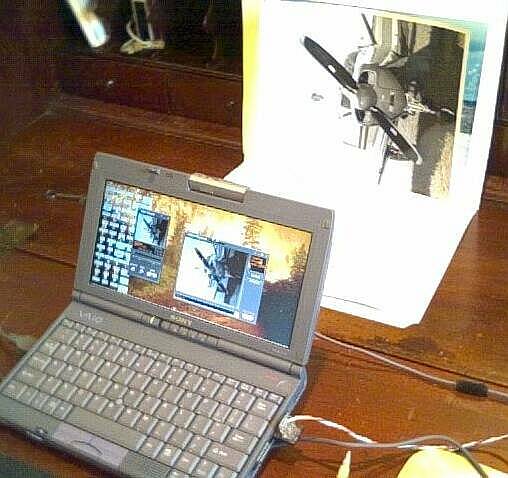 Using a Picturebook or Webcam to Catalog Photographs

For several years now, I have been faced with the management of photo archive material related to aviation history.  The collection that is here consists of around 1500 loose 8x10" b/w and color photographs. I had already spent thousands for a professional photo archiver and other costs to go through the material and sort and box it, but after the boxing was finished, and in part because the archiver did not fully understand the subject, it still remained very hard to locate specific images.

I  continued to have to rely primarily on what was in my brain coupled with calculated guesses as to where each photo would have been put.... and that condition frequently led to repeatedly having to go through all of the images over and over again in order to locate those specifically sought.

An idea to address this problem had been developing in the back of my head over the past year, so, this weekend, I created a blank directory structure that represented the photo boxes and their folders, set up the PictureBook on a desk together with the first folder of prints standing up and framed by the Sony's built in camera.

For those not familiar with the Sony C1 "PictureBook" series, the small rectangle at the top of the computer screen is a built in rotatable camera that, in the image above, is focused on the 8x10 photograph in the folder behind the computer.  If you look closely, you can see that the image has been captured in the onscreen software that is currently running.

In reality, I created two crude batch files to do the job of creating the storage directories, leaning toward simplicity and overkill as it is easy to rename and erase directories after the fact.

After the Vaio's built in camera software, SmartCapture, was started, under the "options" button, select the appropriate directory folder.

Since all of the initial images were black and white 8x10's, I clicked the "effects" button set the effects to b/w and 320x240.

It was then easy to click the software button, flip the front most image down and repeat until all of the photographs in the folder had been captured by the Picturebook's built in camera, a process that would consume about two seconds per image.

As I finished each folder, I clicked the "options" button and selected the directory for the next folder of images.  In the case where a folder contained color photographs, I switched the effects back to (none) to record the thumbnail in color.

Even though I was still prototyping and learning, within two hours I had documented the exact location of 500 images and easily finished the remaining 1,000 photographs the next morning.

Since only about 20% of the photographs I had recorded were in the portrait orientation, coupled with the fact that it's only practical to take landscape images with the Picturebook, I took all of the thumbnails in landscape orientation.  Important... for the portrait photographs, assure that the top is always to the left which will make life easier during subsequent processing. 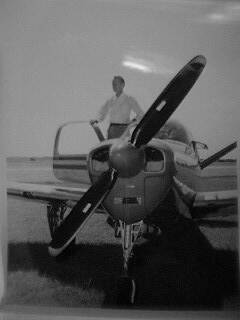 This image is a sample of what I ended up with.  I had experimented with additional lighting to lighten the images, but encountered significant "glare" problems, especially on the images that had a curl, but this result now allows me to find and get to any of the original images immediately.  Virtually all of the thumbs were around 15k with the color thumbs 4-5k more.
One of the discoveries was that SmartCapture's destination folder selection dialogue was a time consumer, since you have to use both "point and click" and the fact that it starts from the computer root.  As a result, I subdivided the folders into three groups.

Each time I started with a new "Box" I moved it's folder to the root of the working drive to save the time necessary to navigate there.  If it was not complete at the end of a session, I would put it back into the "Pend" folder, and finally into the "Done" folder when complete.

In addition to making folder selection easier, doing this removed the confusion which had led me at one point to putting images in the wrong place.  At the start of each folder, I would also mark the paper folder in pencil with the matching name of the computer directories that were to contain the thumbnail images to come.

After the images were snapped, by using the IrFanView thumbnails option (www.irfanview.com) I can now easily scan all of the small images to quickly and easily locate what I am looking for.  The images show little detail (recognizing faces is "iffy" for example) but the resultant value is immense to me.

Note that the color depth of the "thumbnails" image that you are looking at has been reduced to 16 colors (from 256) to keep your image load time here to a minimum.

The actual screen is much easier to read, but in the event that I need more detail, double clicking on any of the images displays the full 320x240 image. Further, once a full image is open, clicking on the forward/back arrows scrolls through the full images depending on the current sorting.

IrFanView can also easily deal with the 20% of images that were not in landscape orientation using the following steps.

Finally, generate a CD containing the folders that you have created to go with the collection.  Even though the images in this case were tiny (around 14-15k jpegs) a thousand 15k images totals up to 15 megabytes, so, diskettes are not really practical.

You can also use IrFanView to print out thumbnail pages for each box or a loose leaf catalogue for all of your images.

Other Twists, Approaches and Problems

The same concept above using a Sony "Picturebook" computer with it's built in computer should work with any Twain compliant input method including webcams and scanners.  For example, somewhere, back in storage, I have a thick sheaf of 35mm negatives that I took while stationed in Berlin in the early 60's and I have a negative scanner that should give me the option of quickly scanning low resolution positives of these directly to disk files for the same purpose.

The very elusive piece that makes this process possible is the capture software's ability to continue to capture images without unloading itself between every image.  Sony's "SmartCapture" didn't initially appear to offer this until I discovered that it was indeed storing images to disk every time the capture button was pressed.

IrFanView has a "Batch Acquire" Twain mode that will allow this if the Twain software allows the ability to capture and remain open, but, sadly, most interfaces, including the Sony camera Twain modules, unload themselves as soon as the capture button is pressed.

I do have one piece of software, FineReader, that contains a "scan manager" which, somehow, keeps these interfaces open so that multiple images can be scanned in a minimum amount of time. I would be very interested in learning more about how to achieve this with other capture software such as IrFanView.