Beverly's the techo half of this pair... 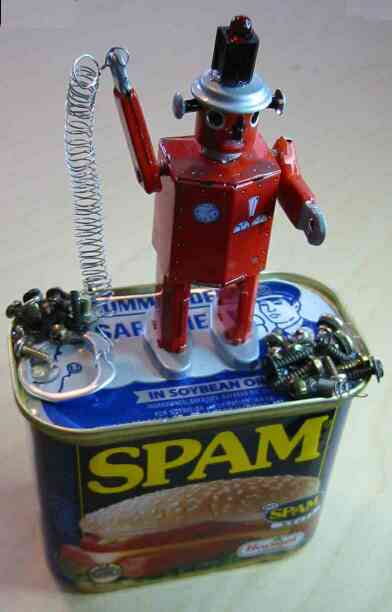 Life moves on and while life began with mechanical toys, those old toys have evolved away from the atoms of matter that toys were were made up of exclusively toward and into the electrons that have become central to life in the twenty first century... electrons of information and software but still including a few of the hard pieces that are still necessary give access into that universe while providing the fun of toys that you can still hold in your hands... in spite of the irritations that they may also bring with them such as repairs and spam.The key components of the images on this site began with a Kodak DC20 digital camera and a Hewlett Packard 200LX "palmtop" computer but have evolved on to an HP Jornada 548 and it's optional "Compact Flash" camera.
Robot Sculpture by Betty Darrah

Web Site on a Chip. 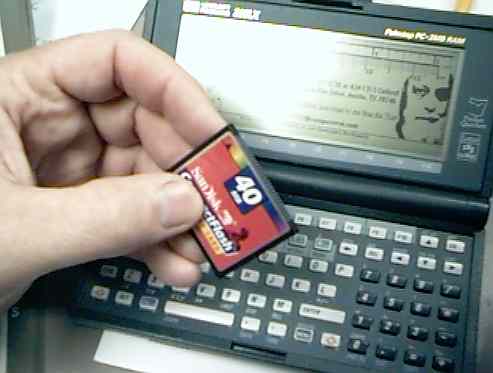 Sometimes I envy those who only have to deal with one computer. One of the major considerations that I have in maintaining this site is simply tracking down the most recent location where I worked on the html code, home, office, laptop, Rebecca's computer???


Since this site began, my HPLX storage has evolved from a 1.3meg total through a 15meg pcmcia card then 20, 40, then 128, a 256 and, finally and unbelievably, a 512 megabyte compact flash card in the Jornada.  A couple of years ago it dawned on me that the tiny card would make an ideal data coordination tool and the best location for the primary source files for this and other sites.

I first began using the card as a file transporter from office to home and back, the multi megabyte space option was a welcome replacement for the 3.5" diskettes that I had been using.  I had card slots on all computers, so I began by transferring the latest site files to each computer as I worked, but, since I am lazy if nothing else, I have evolved to simply editing the code and images directly on the flash card, so it, and the site are the only guaranteed locations for the latest versions. This site is  under 1 meg, so there is a lot of elbow room left plus I can pull the flash card out of my Kodak DC120 if I need more storage space.

It's amazing that I no longer have any mental issues with putting off editing and updating (when I have the time) since the final source is always with me. Since it's in the Jornada, I can even add or edit text at a lunch counter, while traveling or even in bed if the muse stirs.

It's electrical magic. Although the concept is almost 30 years old and it's made home life a lot easier and even fun for me for most of those 30 years. It's a "building block" approach to the elusive concept of "home automation" by making automatic and remote control of lights and appliances possible without the need for running addition wires all over the place.

The concept is simple. There are two basic X-10 device types, those that respond to on/off/dim signals and those that transmit those signals. The signal is not transmitted through the air, but through the house wiring. Each "receiver" has a rotary switch that assigns it a "number" and once set, when a transmitter device sends a number and an action command such as "Number 3 ON" all of the units set to number "3" will turn ON.

X-10 has also become a "standard" Home automation switches made by Leviton, Stanley, Radio Shack, GE and many others all use the same system and concept, so componets from all of these manufacturers will work flawlessly with components from the other manufacturers.

The system is easy to expand.  Additional plug in modules are available from local sources for under $20 each.

The closing of the sale of the old Windermere Gliderport finally occurred in the late spring of 1999.

A consortium of pilots headed by Dana Whatley Martin are the new owners, taking over with the enthusiasm that I originally had with this unique property but lost over time. Here's hoping that they are happy and successful and bring back the activity and joy that the edge of the runway once held.

While there is a lot of new construction there providing personal hanger space for Windermere property owners and the runway has been lengthened to over 4000'  There is now a AE/AI mechanic in residence as well.

It's fading from memory, especially since I no longer own the hangar, but the Fourth of July weekend 1997 brought with it a distraction, if you can call it a distraction...