The key components of all of the images originally used at this site are a Kodak DC20 ($99, but now long gone) digital camera and a Hewlet Packard 200LX "palmtop" computer. The images are taken in the field and when the camera's 8 picture limit is met or approached, they are downloaded (normally in my belt pouch on the move) from the camera to the 15meg FlashRom Card in the computer. That translates to a storage capacity of about 150 images if you happen to own an empty 15meg card.

Although the 200LX and the DC20 are tiny, the cables and other accessories that the manufacture expects you to carry around with the units generally weigh more and take up more space than the primary devices themselves. An excellent example of the disparity is that the camera to computer connection cable that is shipped with the DC20 weighs more and takes up more storage space than the camera itself.

The only good solution I have found is to design and build my own serial connection system. The following picture shows the entire connection setup for the computer, modem and associated serial and telephone connectors. Since the image was taken, I have modified the HP connection to include a DC20 camera connector. I apologize, but the 4 clear plastic RJ-11 connectors in the picture are hard to identify. 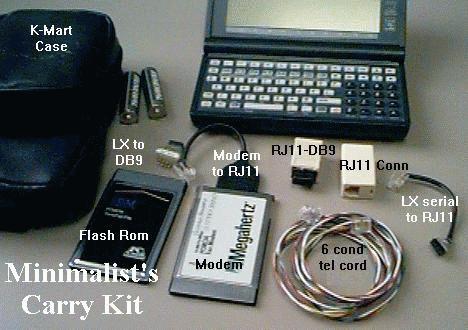 For the HP owners out there, note the HP serial to DB9 adapter just above the Flash Rom. It's smaller than a small pecan and adapts the standard HP serial connector to any DB9 PC serial cable.

The case on the left holds everthing shown OR both the camera and computer if the modem and connectors, except for the camera connector, are put in a pocket or left in the suitcase.

Click here for more Serial Secrets and a description of the system shown above.


Palming About
Have spent some time with a Palm Pilot Pro and while was very attracted very interested in it's size and capabilities, I went back with the HP 200LX because of it's vastly superior capabilites for the most part, and then went on to the Jornada 540, and now 548. 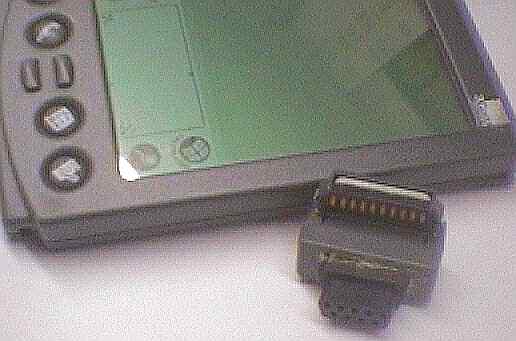 Well, I've now moved on to the HP Jornada 540 which had the same problem with the cable... total size and weight of the cable itself was not much less than the Jornada itself... so, unpack the wirecutters, solder, iron and hot glue gun at begin anew, and you can view the Jornada minimum serial results by clicking here.