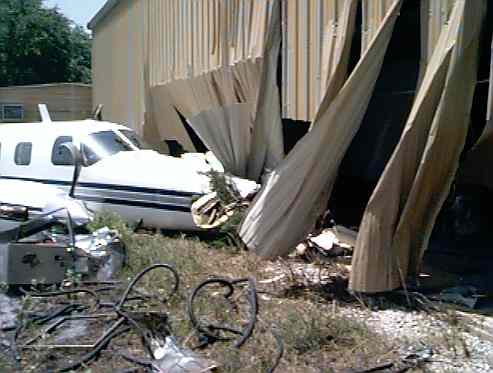 It started with one person chartering a half mil twin turboprop to fly from Dallas to Windermere for a game of golf. For whatever reason, the pilot neglected to lower his landing gear before landing and continued a normal approach until he heard the propellers contacting the pavement instead of the squeek of rubber spinning up on asphalt.

With the plane on the ground without wheels, directional control was gone and the plane drifted off of the pavement onto the grass and homed in on the hangar. The pilot said that the last thing he remembers is seeing the airspeed indicator still showing 105 knots (120 mph) just before hitting the hangar.

He hit the hangar (and two avaiation fuel pumps) at the only possible point where survival was possible. After shearing the pumps off of their concrete pad, the plane spun down 80 feet of the 100 foot wall blasting tools and fixtures across the width of the hangar.

The "landing" took place at 8:30 am. If it had been fifteen minutes later, someone would have been working near where Rebecca is standing in the picture below. 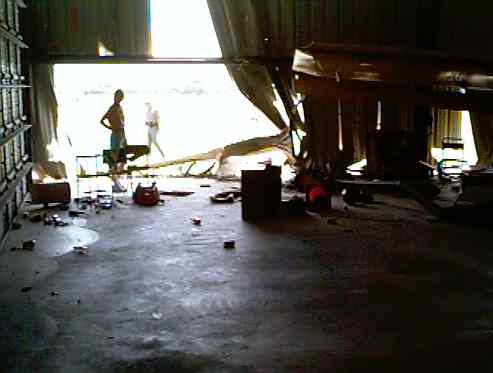 The plane came to rest almost facing the direction it came from. One entire wing with associated tip tank (and fuel) completely inside of the hangar.

The pilot and passenger wasted no time in exiting the aircraft after it came to a stop. When they came to a stop, they then realized that one of the two turboprop engines was still running! It was not only running, then engine exhaust was actually inside of the hangar. Fortunately, the pilot was able to return to the cockpit and shut it down before anything caught fire.

One of the steel structural beams was deformed beyond repair. A significant amount of jet fuel was dumped on the ground above the underground fuel storage tanks. All in all, an eventful fourth.